Depending on who you speak to the first and second versions of the GCC, namely GCC 2004 and GCC 2010 were both riddled with clauses that caused on-going headaches for many GCC users. 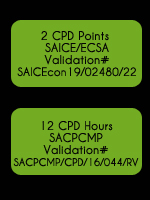 According to SAICE who publish the General Conditions of Contract, the upgrade (in 2015) was very necessary. The reasons for the upgrade were because of a number of grey areas that needed clarification and refinement, and there were also other amendments, that were clearly needed to bring the GCC 2015 in line with industry requirements, and make it easier to work with.

In reality, the revised 3rd edition provides much needed clarity and simplifies a whole range of issues and in turn these changes provide much needed contract administration support, as well as the equitable appropriation of risks under the contract. This is especially good news for the construction industry, as the GCC 2015 remains the standard form contract of choice, especially for local Government-run projects.

One of the biggest changes, that has a significant impact on the negotiation power of Contractors when doing business with Government and in the GCC 2015 is now a clause that gives Contractors the right to suspend work on current projects, if they are not paid.

This clause alone is a major breakthrough in contract agreements and now makes the GCC 2015 a far more attractive contract option. In the past, Contractors were never able to suspend work on an on-going project, regardless of whether a payment certificate was issued or not, but now this right has been formally carried over to the GCC 2015. So, if you are going to start tendering for more Government work then this is where this training course comes in and is a must-attend! It focuses on and discusses in detail the significant changes as well as the new features of GCC 2015. This training course has been designed and developed to give you a completely unbiased look at how the GCC 2015 works in practice. Plus we will also be taking an in-depth look at the GCSC 2018: General Conditions of Contract which was launched in 2018.

Think of this multi-CPD-accredited training course as your essential guide to the GCC 2015. It will provide you with much needed clarity and detail on everything you need to know about how the GCC 2015 contract works in a real-life construction environment and the course is presented in a fast-paced and plain-English way.

We do present this GCC 2015 training course as both an online and classroom/face-to-face option. However, no matter which format you select, one thing is for sure, this GCC 2015 focused training course is guaranteed to provide a whole new level of understanding to anyone that has to deal with and use this contract on a regular basis.