World-Class Projects In SA Are Being Rolled Out With The NEC4 Contract. Are You Up-To-Speed?

World-Class Projects In SA Are Being Rolled Out With The NEC4 Contract, says Alusani® Course Leader. 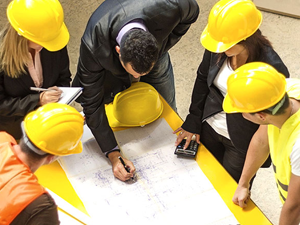 Described by the NEC as an ‘evolution, not a revolution’, the NEC4 builds on the success as well as the content of the NEC3 to achieve further improvements. Alusani® Course Leader, Cameron Staude, says that most of South Africa’s state-owned enterprises, including Transnet and Eskom, are predominantly rolling out contracts based on the NEC3 suite of contracts.

“While the Construction Industry Development Board’s regulations haven’t been updated since 2015, they do prescribe that the latest contract be used. Currently, the latest contracts that are at our disposal are FIDIC 2017, JBCC 6.2, GCC 2015, and NEC4,” says Staude.

This makes it essential for professionals in the built environment to quickly get up to speed on all its new features.

“The project team involved in the R4.4-billion MeerKAT radio telescope project, which will eventually become part of the Square Kilometre Array, is leaning towards using the NEC4 contract suite. The progressive nature of the contract, combined with its appeal on large projects where there are international stakeholders, made NEC4 the contract of choice,” says Staude.

Many of the new features of the NEC4 contract allow for greater flexibility. There are also two new forms of contract, namely the NEC4 Design, Build and Operate Contract (DBO) and the NEC4 Alliance Contract (ALC), providing an even greater range of potential contract and procurement solutions for clients who are undertaking projects and works programmes.

“One of the interesting features in NEC4 is a clearly stipulated process for the Early Warning system, which is a mechanism where the Project Manager or Contractor notifies relevant parties of a potential risk before they occur so that the parties can avoid or mitigate the risk. In NEC3, there was uncertainty about the steps that the Project Manager had to take if a potential risk was picked up, but NEC4 gives clear guidance on how these situations should be handled,” says Staude.

“The NEC4 encourages a collaborated approach, instead of a regimented one. The way that the processes have been clearly defined ensures that there is a regular commercial management process for the project, which will benefit all parties involved,” says Staude.

The NEC4 also provides two incentives for the Contractor which didn’t exist under pricing Options A and B of NEC3. NEC4 has introduced a Contractor’s Proposal where it can make proposals to reduce the Employer’s Prices whilst sharing in a pre-agreed percentage of the sharing as well as a proposal for acceleration to reduce the Completion Date. Further the NEC4 now provides for a final payment certificate as well as a new dispute resolution process where disputes are hopefully avoided.

“Regardless the size or type of project, the NEC4 contract can work for you. I’m here to give you the practical advice you need on how to effectively make the transition from NEC3 to NEC4,” concludes Staude.